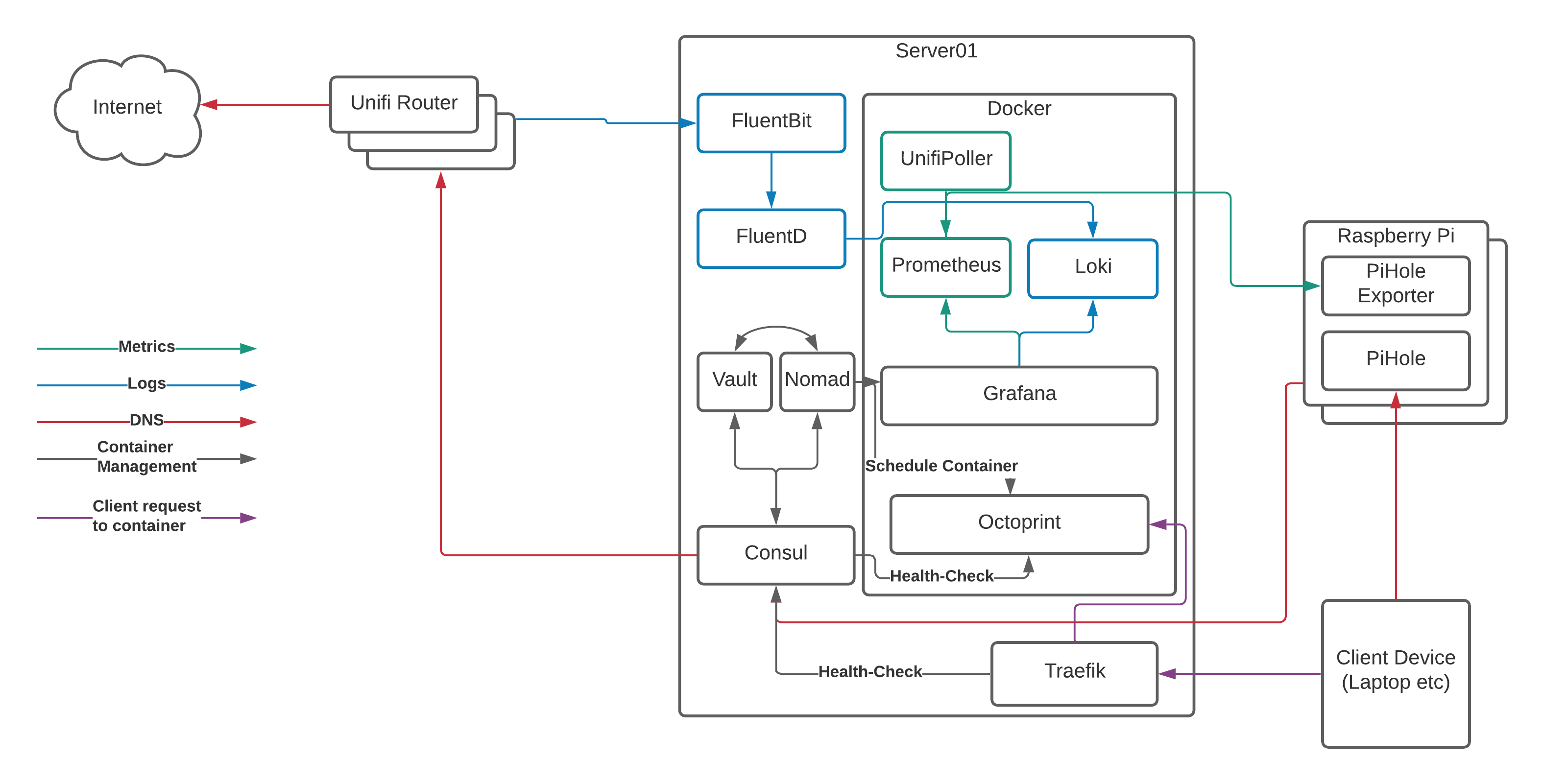 So far in this series we’ve covered an overview of the stack we’re trying to create and looked at DNS filtering with PiHole.

This post is going to look at how we run containers on our network, how we can easily browse to those containers, and how we find their services.

Before we dive in to the detail, let’s look at the target state for our setup:

This might look complicated at first glance, but it really isn’t.

Server01 is the physical server running Arch Linux that I talked about in our overview. You can do this with a number of Raspberry Pi’s instead of a single server, but that adds some more complexity and reduces the amount of resources available to us, so we’ll focus on a dedicated server here.

Server01 has a number of services running on it, so let’s take a brief look at them now:

Running on top of Docker, you can see a number of containers. We’ll focus more on these containers in the next post, however leaving Octoprint (the system that provides a web interface to my 3D printer) to one side we can see the following software in the stack:

But what about ELK?

The ELK Stack (Elasticsearch, Logstash, and Kibana) is probably one of the best known open-source monitoring solutions out there and I’ve been using it in my professional life for nearly 10 years now.
It scales, it ingests logs beautifully, and it’s one of the darlings of the open-source world, however recent changes around their approach to licensing and some experiences with using it to query metrics rather than logs have made me question whether it’s the right tool to be using in my professional work.
This led me to discover Prometheus and Loki as alternatives (I’ve always used Grafana instead of Kibana because Grafana is far more flexible and connects to many more back-ends than Kibana can), and I though “what better way to experiment than on my home network?”. Three months in and I don’t regret it at all. Loki, Prometheus, and Grafana are all far more lightweight than their ELK counterparts and it feels quicker to respond to complex queries. As a result, I’m sticking with this as a combination at home, and even starting to suggest it to clients at work!

So how does it all glue together?

When we launch a container via Nomad, Nomad does two things:

Consul then executes the health-check repeatedly based on the parameters until it passes a number of times in a row. At this point, it marks the service as “healthy” and it appears in DNS.

Finally Traefik checks consul for services that are healthy, and then configures itself to pass traffic through from HTTP, HTTPS, or another TCP port to the container’s exposed port, allowing you to access your container via the default port for your application via the DNS hostname.

Yes, but where’s the config?!

Those of you wishing to “get ahead” on the subject could look at the sections for Consul, Vault, and Nomad from the excellent documentation at https://learn.hashicorp.com/, and I promise that I’ll have config files for you in my next post!